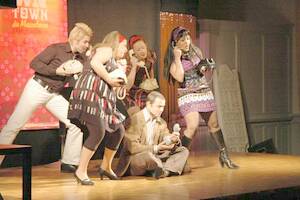 «Call Me» from «Downtown – Die Musicalrevue».

Petula Clark is the most successful British singer of all time. With hits such as «Downtown», «My Love» and «The Other Man’s Grass is Always Greener» she conquered not only the charts but also the hearts of people the world over. In «Downtown – The Musical» the two authors Eric Langner and Markus Buehlmann bring London’s «swinging sixties» back to life in all their glory thanks to the songs written by Tony Hatch.

Status: First version of the book has been finished and sent to the composer, where it is being considered. A songs-only adaption of the play called «Downtown – Die Musicalrevue» has been staged successfully in Brunnen in December 2007.

«Management briefing»
There is a great deal of managing to do in an international company. Thanks to countless slogans, programmes and promises everything sounds great, but usually there is «nothing behind it all». A witty and not uncritical look behind the scenes on a management floor which not only provokes reflection but also questions many ingrained and pointless behaviour patterns.